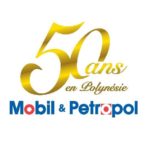 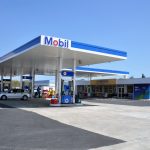 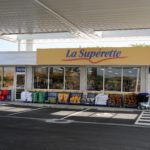 1950: The Sin Tung Hing establishments, headed by Mr. Siu Kung Po, owned a kerosene warehouse in the Titioro valley where were stored 5 gallon barrels of hydrocarbons directly imported from the United States.

1957: The first transportation of hydrocarbons on board tanker, the « Robert Weiter », was organized by the Siu family from San Francisco. The storage and the distribution of fuels were done in barrels.

1962: On the 15th April, a concession for a maritime location is granted to the « Société Tahitienne des Dépôts Pétroliers » (STDP) a Vacuum Oil Company’s partner, for the purpose of a fuel warehouse of 5 572 m2 construction.

1965 : In order to meet both civilian and military increasing needs, 11 tanks were established in Fare Ute thereby forming a total storage capacity of 20 000 m3. This is how the mountains of tanks that used to block the Tipaerui warehouse and the waterfront disappeared of the Polynesian landscape.

At the same time, STDP handed the warehouse exploitation, which means the unloading, the storage and the packaging of all hydrocarbons to the « Société Tahitienne des Hydrocarbures » (STDH) managed by Victor Siu. The commercial distribution of fuels was entrusted by Mobil Oil Australia to a brand new company called Service Mobil which is also managed by Victor Siu.

This is how the firsts Mobil gas station were born, successively to: Fautaua, to Paofai and to the « Pont de l’Est » (East Bridge) with the Aina Pare station.

In order to guarantee an efficient transport, Service Mobil equips itself with a Berliet tanker able to furnish the most remote stations in the best conditions.

In only a few years, the network grows around the island and promotes a more geographically dispersed habitat, allowing leaving the city center of Papeete.

1983: Due to the increase in the petroleum products consumption, the STDP Company got the approval to build a new warehouse in Taunoa which was inaugurated in August. This new warehouse was made up of two jet fuel tanks with a capacity of 18 600 m3. Furthermore, the site of Taunoa’s selection, sheltered by a seawall on the reef area, meets a double need in terms of safety: a storage safety in order to the Polynesia to build up a more comfortable storage, and the safety against fire risks which could affect the Papeete city center.

1985: The STDS, a Service Mobil branch, achieved the construction of the diesel storage bin in the same reef area, with a capacity of 7 345 m3.

The same year the Sermobil Distribution Company was launched and it was responsible of the gas stations network management.

The same year, Service Mobil celebrated its 25 years old. This was also the year where the headquarters of   Service Mobil was built in the industrial zone of Papeava in order to reunite all the Service Mobil and Sermobil Distribution administrative activities.

1990: Sermobil Distribution set up an extension and updating program for its gas stations network in order to focus on its customer service and customer reception quality.

The « Carte Mobil » (Mobil fidelity card) was created in order to lastingly make customers loyal. It was the first private smart card on the Polynesian territory.

2007: Mobil Australia left and let its shares to its historical partner, Service Mobil.

2009: Petropol invested in New Caledonia and decided to create the Petrocal branch.

Since 1963, Petropol attach a major importance to the Safety and Environmental Policy in its activities.

2009: Petropol invested in New Caledonia and decided to create the Petrocal branch.

2010: Sermodis NC was created, it is the branch of Sermodis. The gas stations exploitation in New Caledonia began through the creation of Mobil Pont des français gas station.

2014: Petropol celebrates its 50th year of partnership with Mobil.

2017: Mobil Koné gas station became the first store of our network to reach a surface of 240m².